Building games with HTML5 with Construct 2

The gaming world has surpassed all the expectations since some time now,and people have started choosing game dev and design as a career option.Many gaming studios have emerged and many gaming engines and frameworks have been created in the last decade.Now , today I will walk you through how to build some decent games using an HTML5 framework - 'Construct 2' and also I will tell you how to get it published on the store and also how it can be made cross platform.


What are the things you can choose from..
Based on how much details you want to put into the game , the gaming engines and framework have been divided into 3 major categories. So today all whatever Im about to demo will be possible to perform in the free download copy from http://scirra.com/


Getting Familiarised with the UI of Contruct2 
Some major stuffs one should know before getting their hands dirty are: 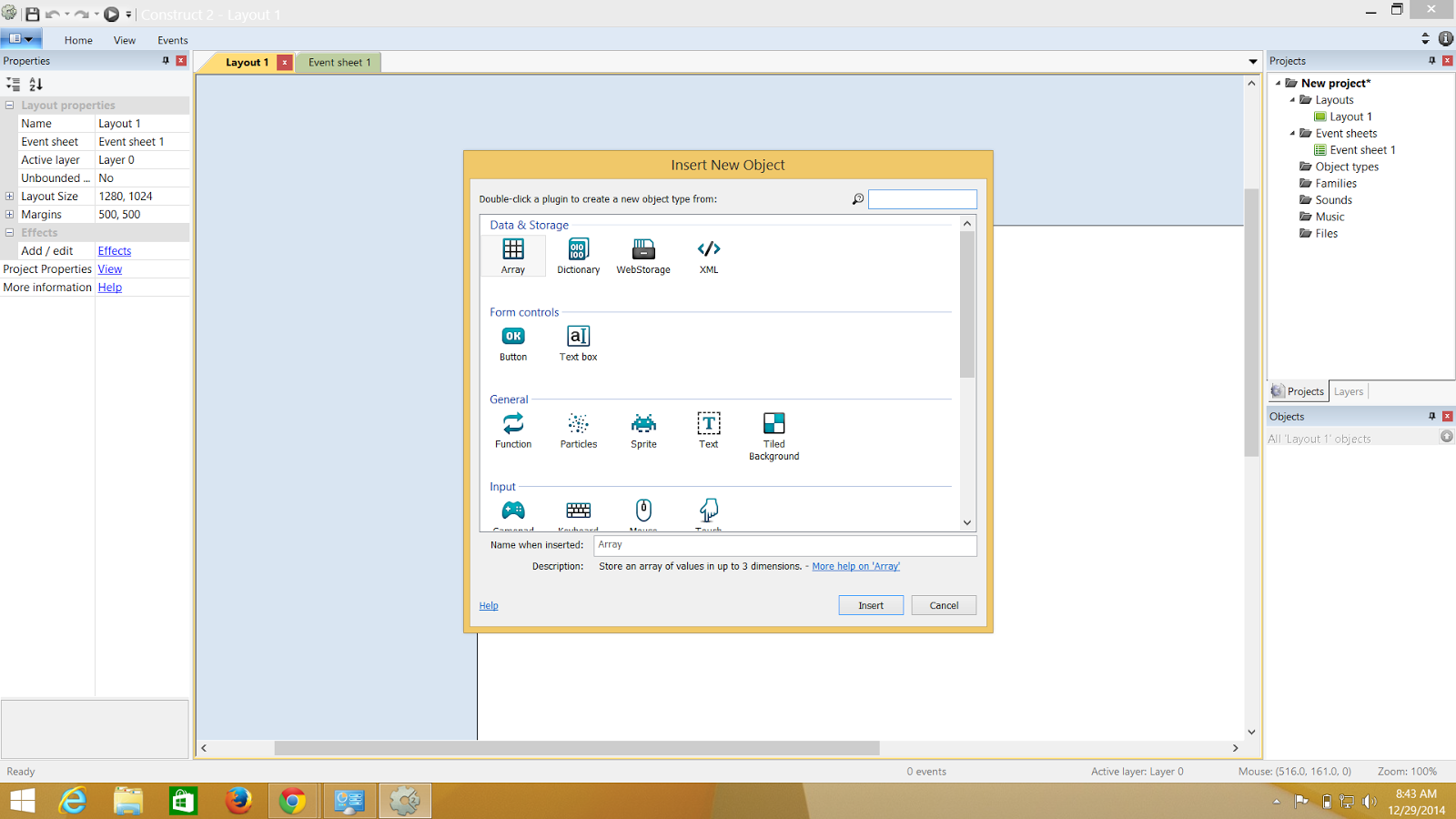 The objects can be loads of different things such as Tiles,Sprites(Image for any character) and Text.To add any object double click "Layout" and select "insert an object".When inserting any new object one should select the "plugin in the dailog box" viz Sprite ; this creates the 'Object Type' and then can be replicated as many times in the project. 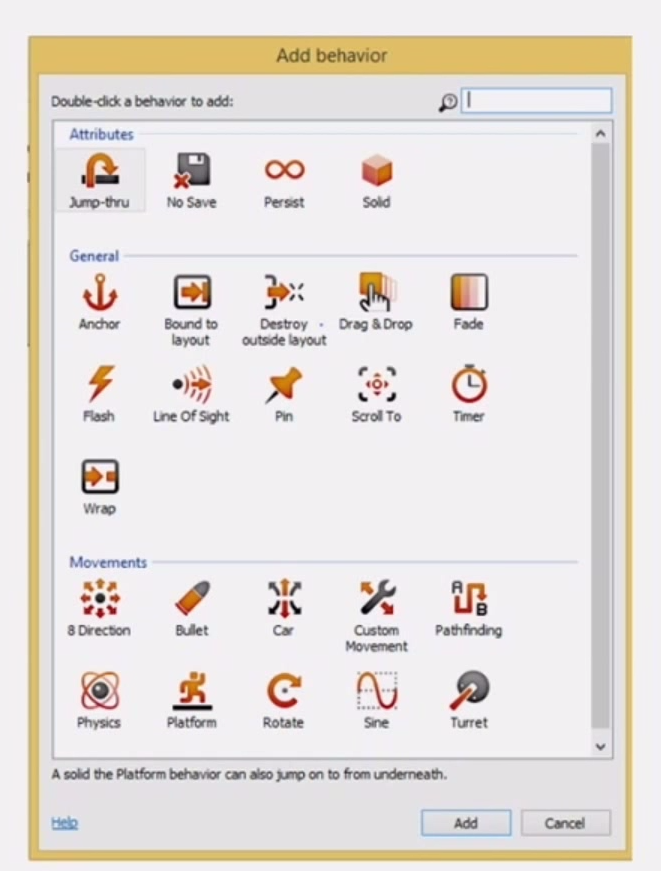 The behaviours are to be binded with the objects and these are built in logics for example lets say you fire a bullet and the the bullet goes in one specific angle. So the angle is the bullets property and bullet is the object here.And it can be added from the properties pane of the respective objects.

Layout determines the arrangement of objects and their orientation in the game .This lets you pick the size and where the objects will be placed and are most pre defined.The event sheet is although the list of actions and events which are mapped to all the onjects in the game and in simple terms is the logic of the objects.

To be very precise,The Events and Actions are like If and Else Statements.The Event stands for the condition of If Or Else and the Actions stands for the execution the that specific block where the result is true.

Adding an Background to the layout.

Adding Behaviours to the Objects..


I'm listing showing just the player behaviour here.Make sure you assign all the values to the objects the exact ones that i wrote above ; if you are following this specific demo!

I can replicate sprites or for that matter any object as many times I want time on the layout.

The events are generally triggered as a cause of an condition. So here i m going to take "ticks" and every tick = 60/sec. So wherever, I implement tick,will execute itself in that fashion.

Now I will go and add events to my sprites.

Well, Now that you know how to add events and I have my character following my mouse pointer. I will simply let is have the ability to shoot as well. Here's how

So first thing is , I need my player's gun to interact with the bullet. Hence, I need a point from where the bullets will be coming out from. I need to create a 'IMAGE POINT'.. and here is how. Select the player on the layout .. Get the properties and select the "Image Point" and create a new Image point . and put it on the Guns's tip. 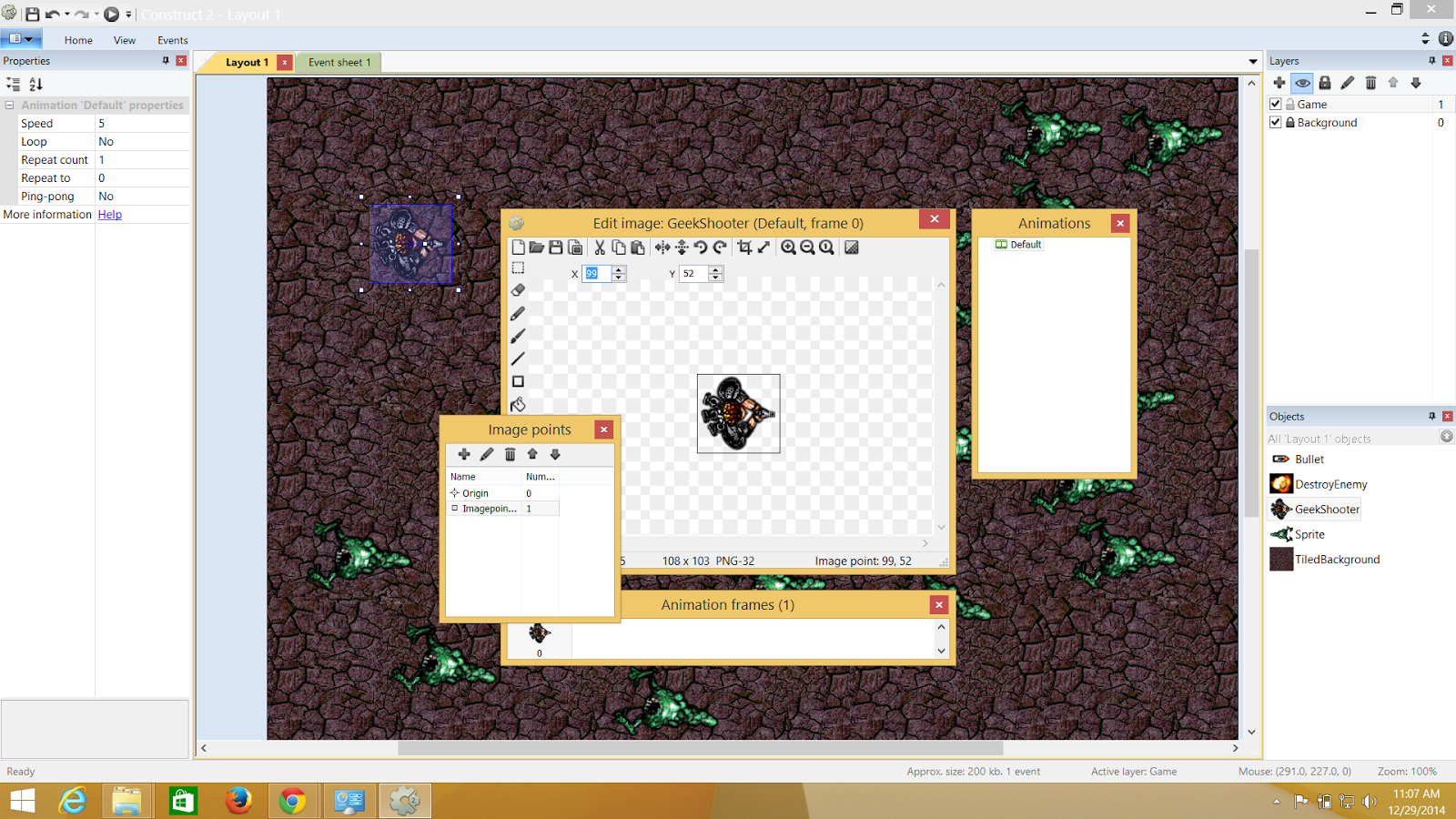 The Explosion and The Monster Destruction

**just a tip: since my explosion had a black background,what i did was changed the blend property of the explosion to "additive" and hence it gets rid of that black property.

***Note:The monster's speed can be controlled by selecting them and lessening their speed 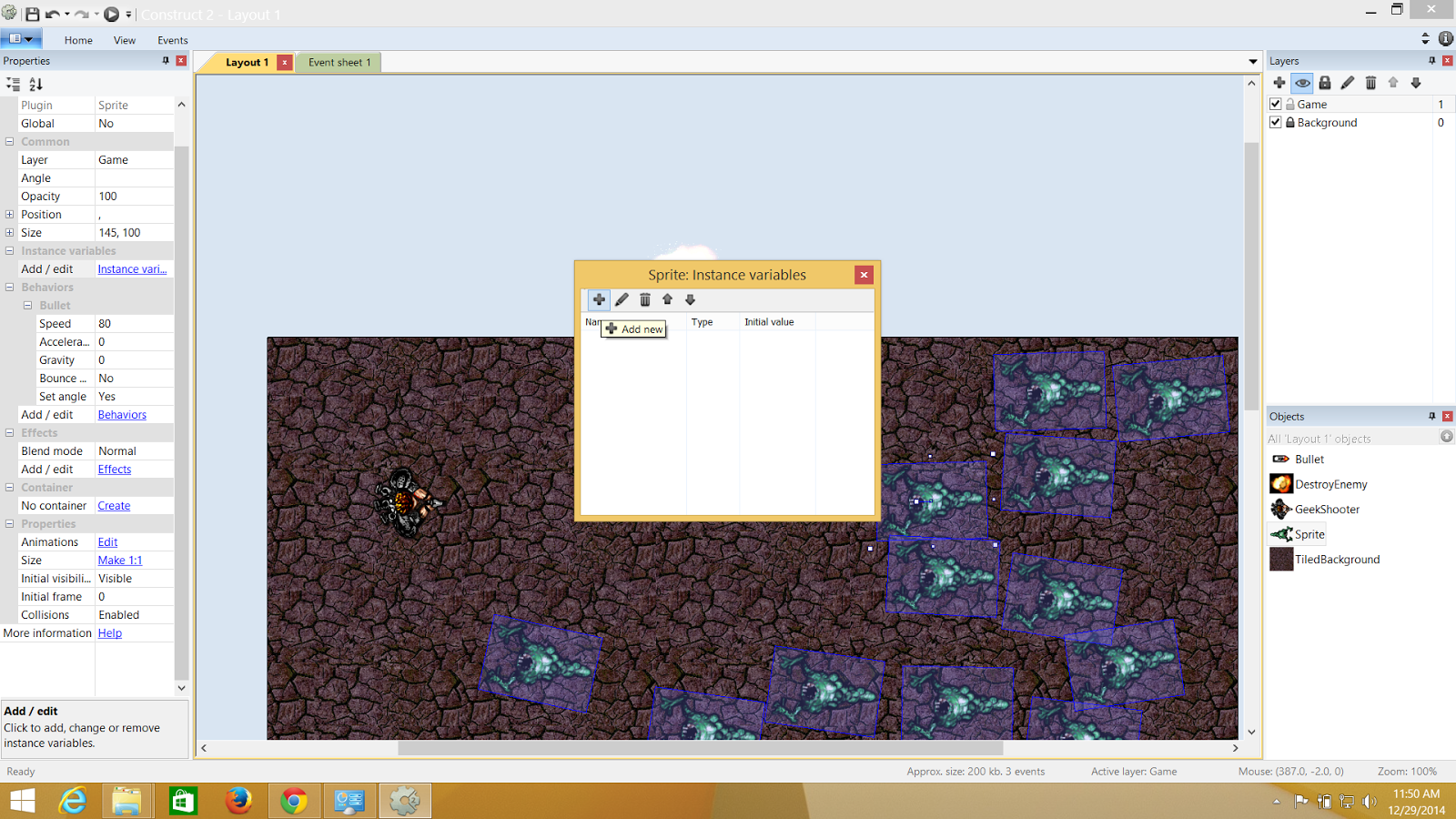 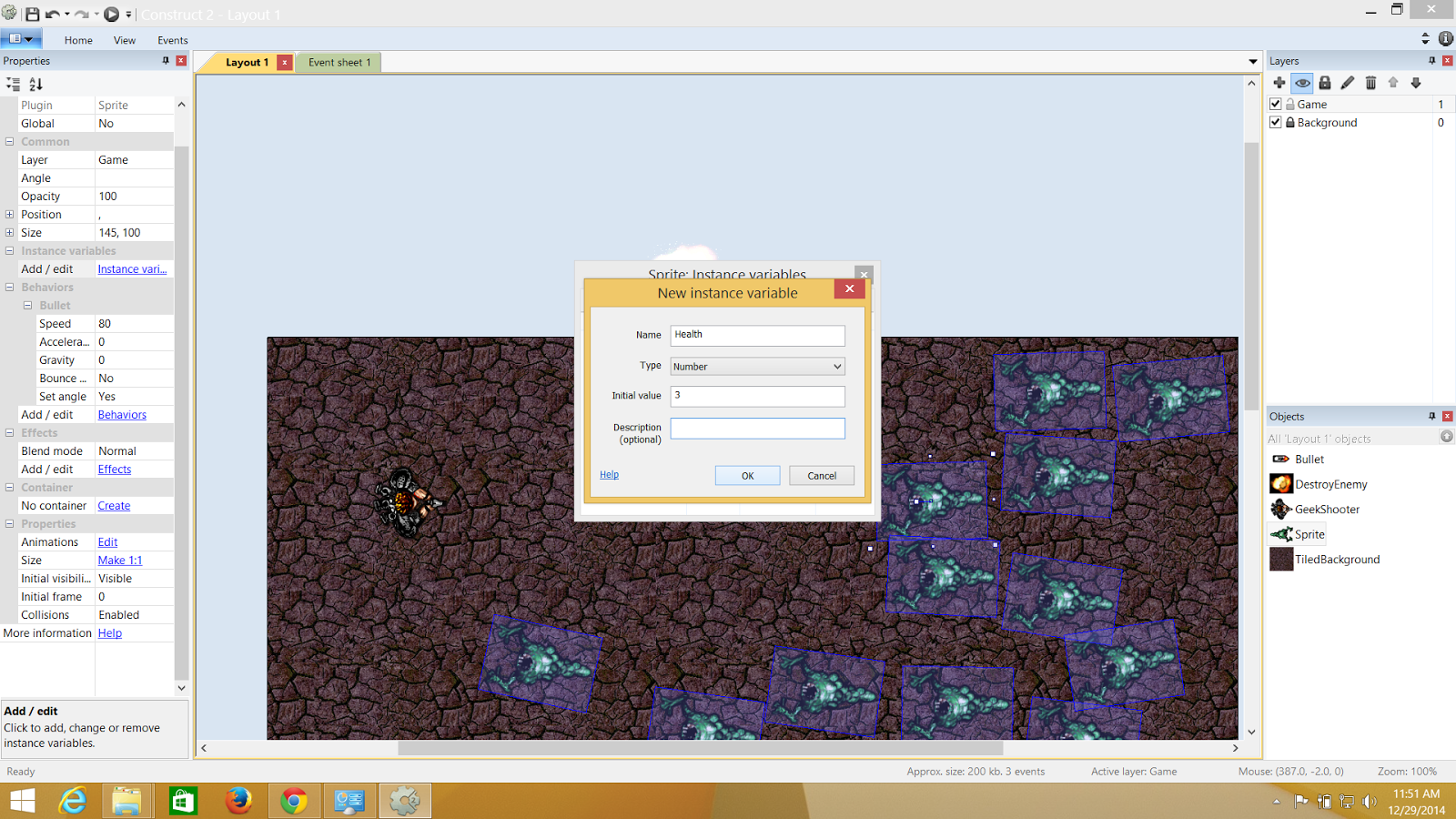 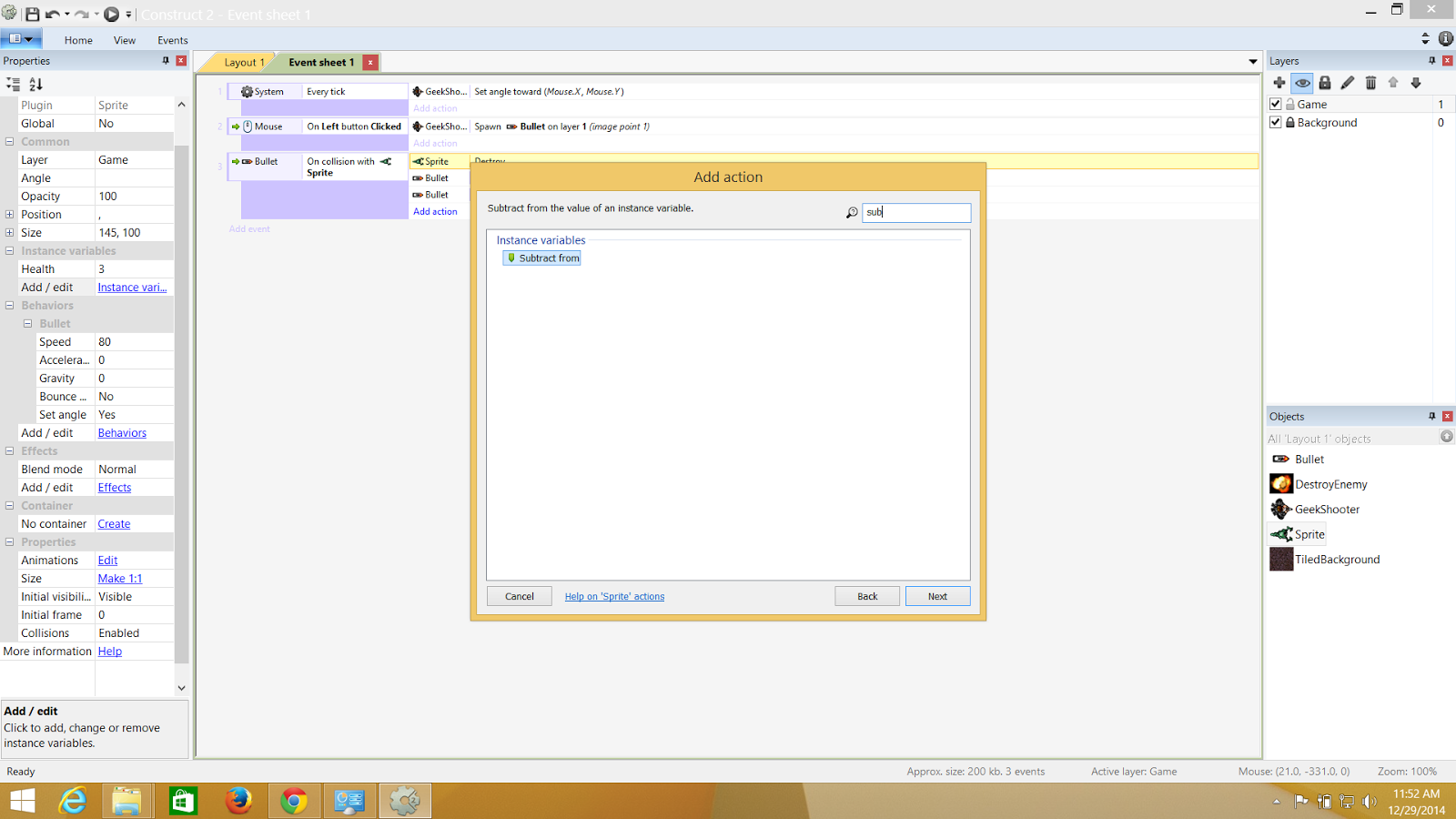 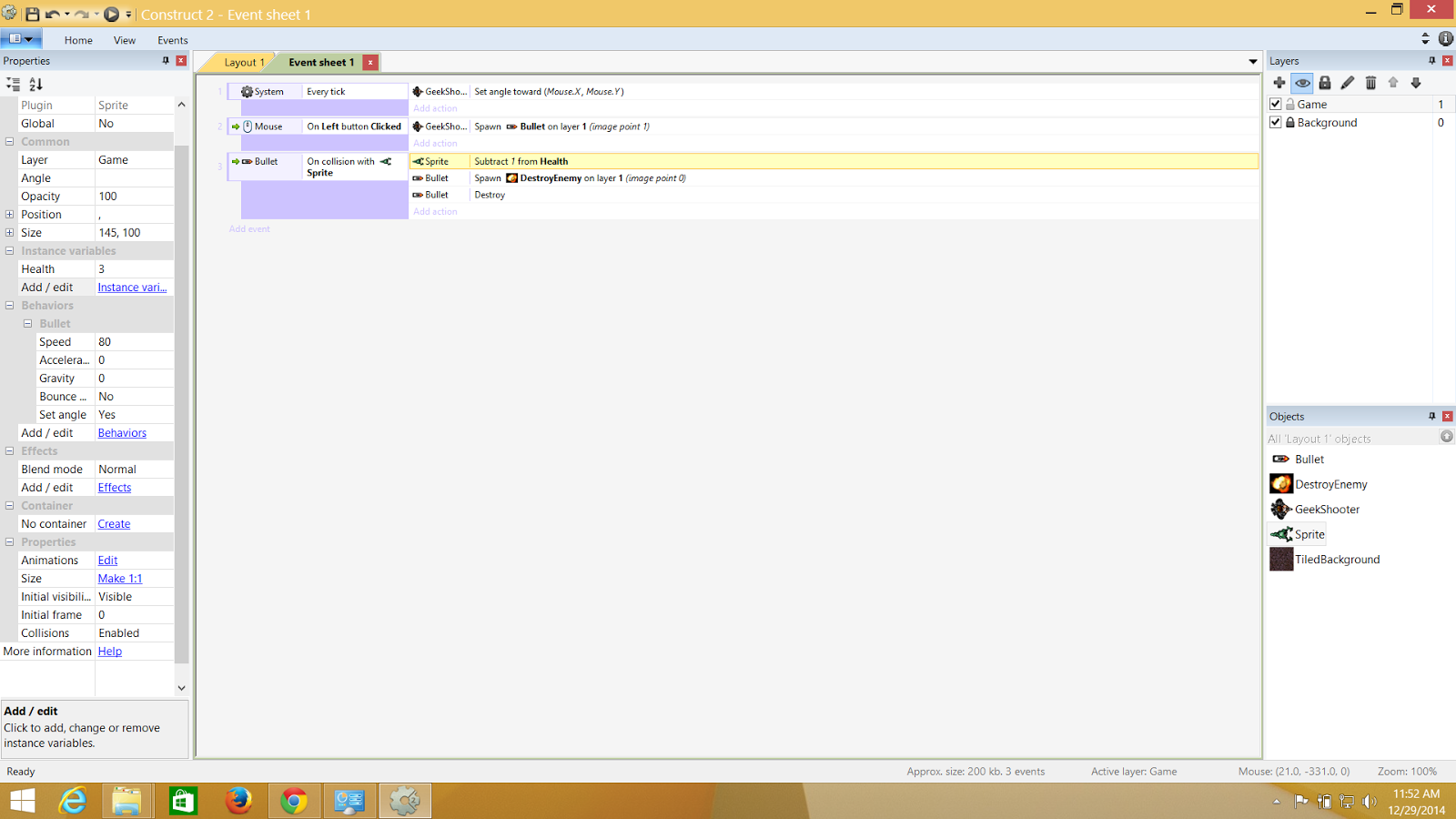 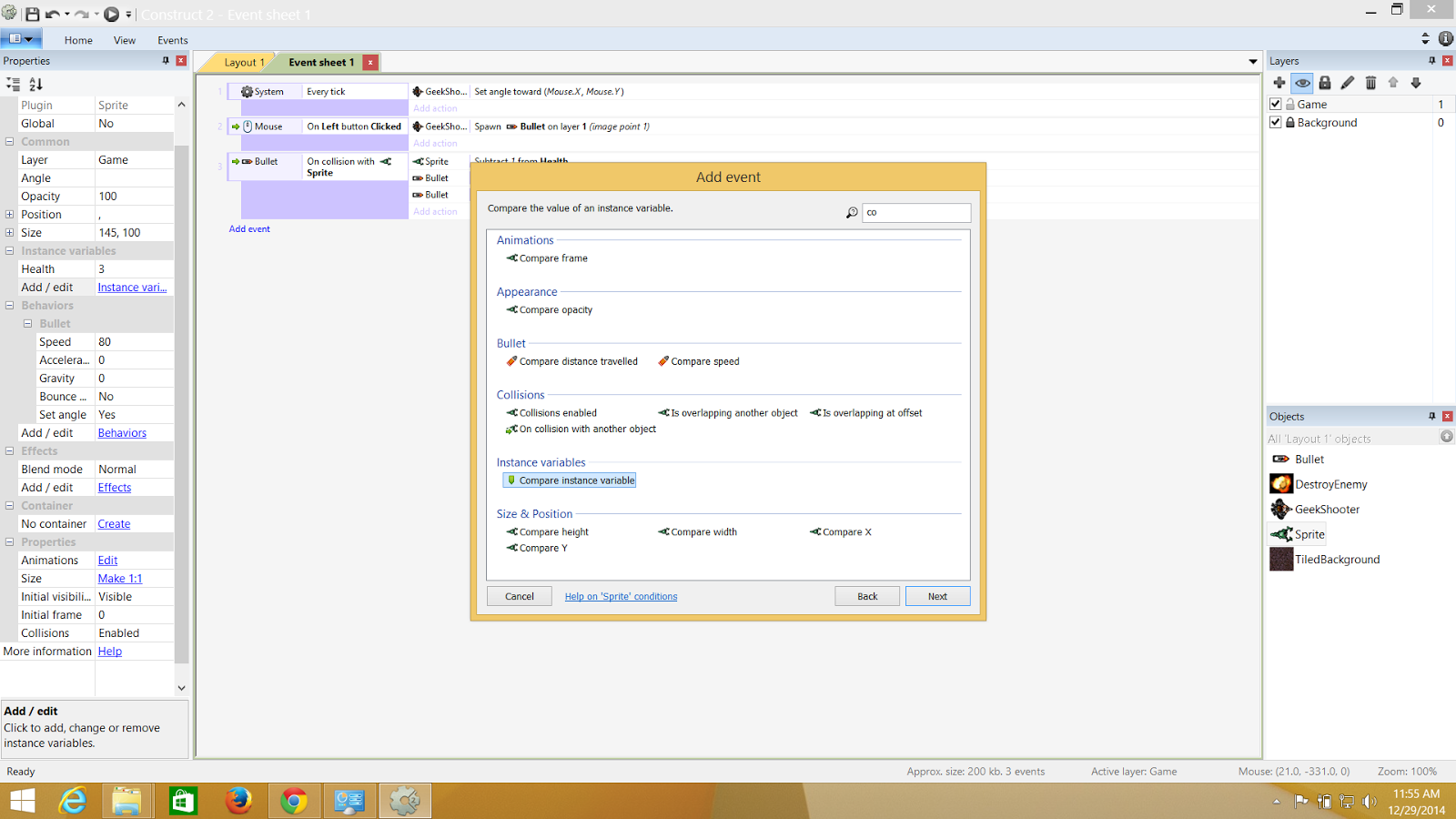 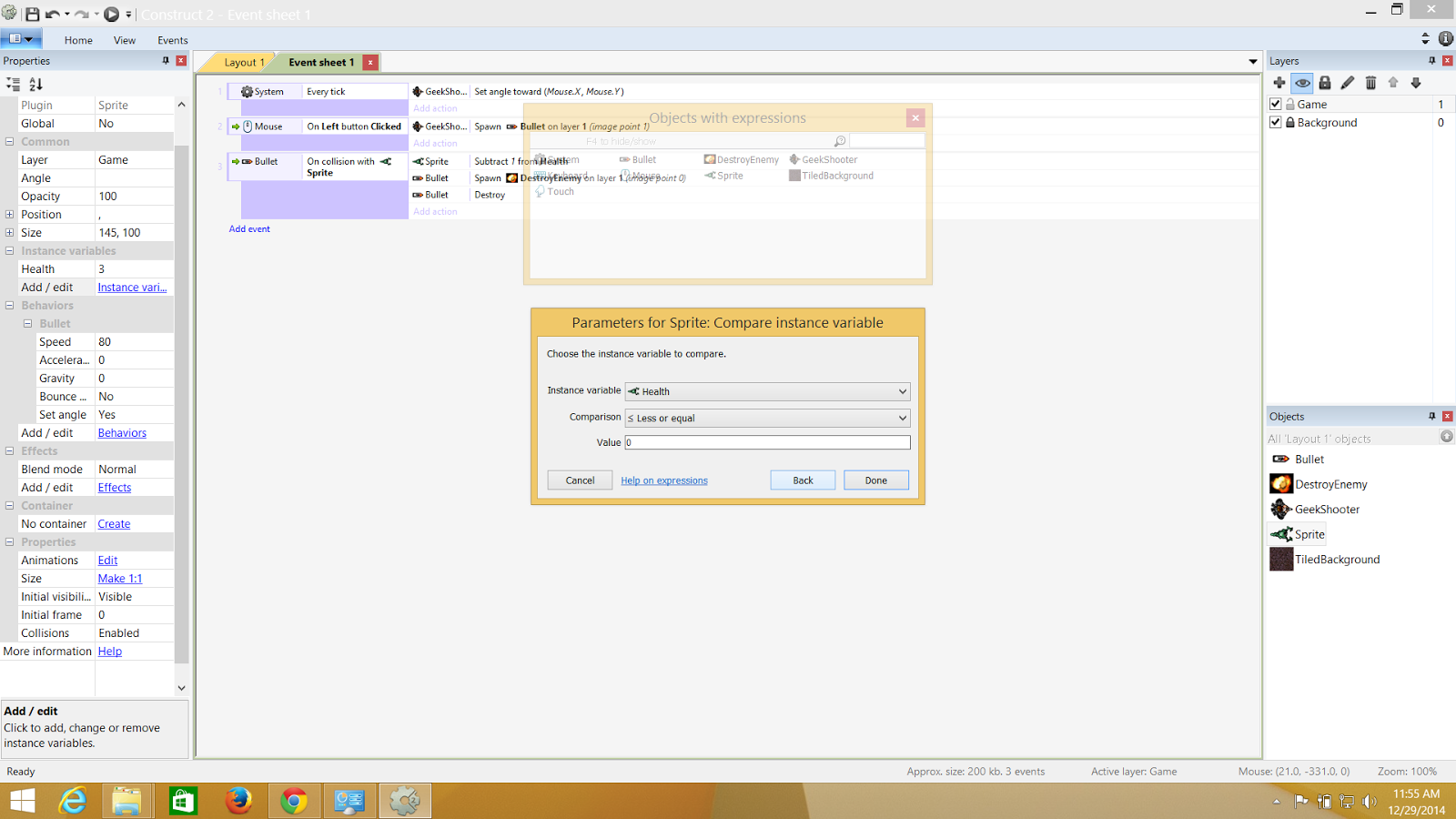 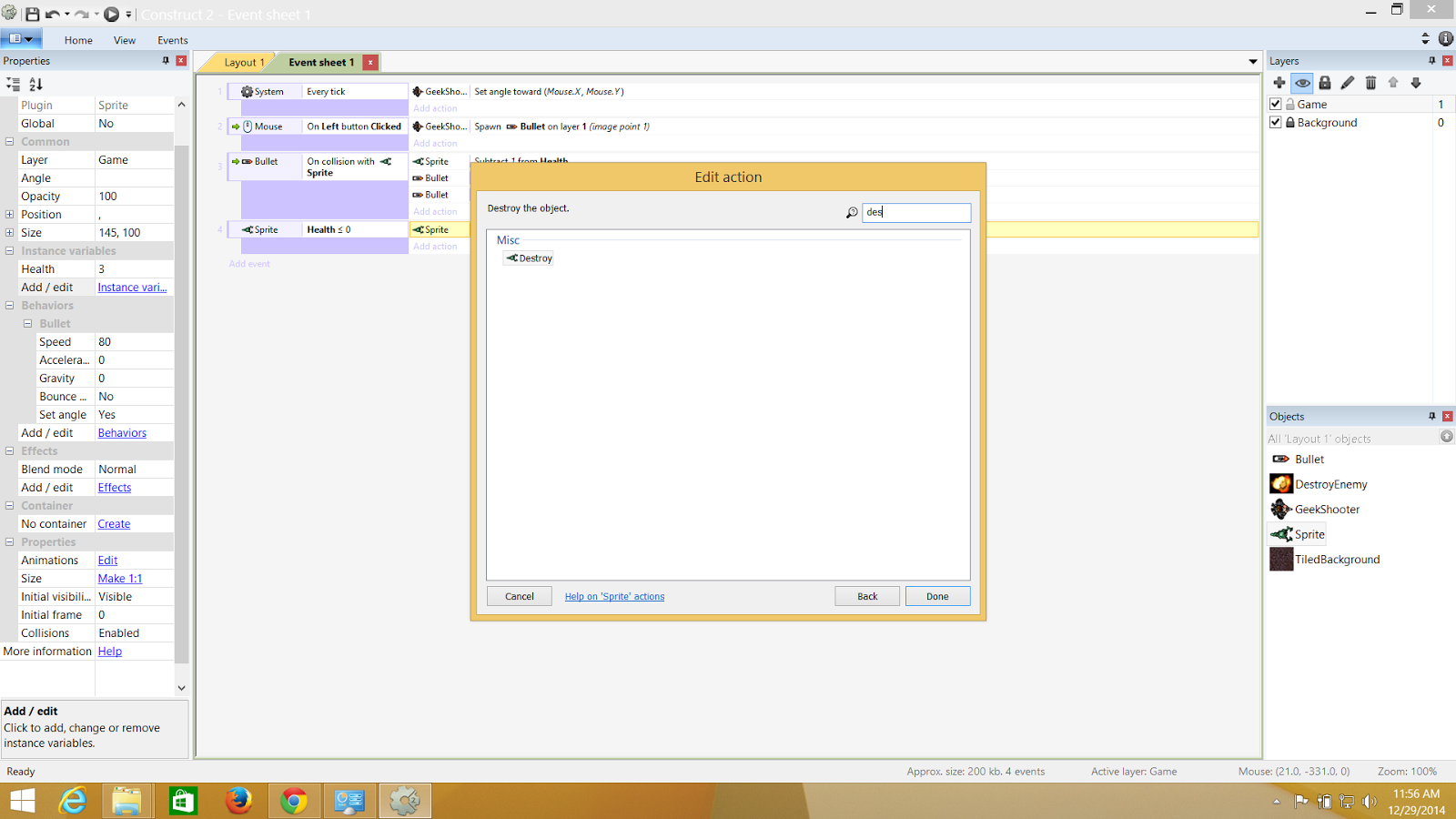 The Heads Up Display AKA HUD

For this we create a new layer, and name it HUD . The new layer we add the object type "text" and name it as score.and it can be done by adding the sore variable with the score text.and disabling parallex so that the score doesnt move. 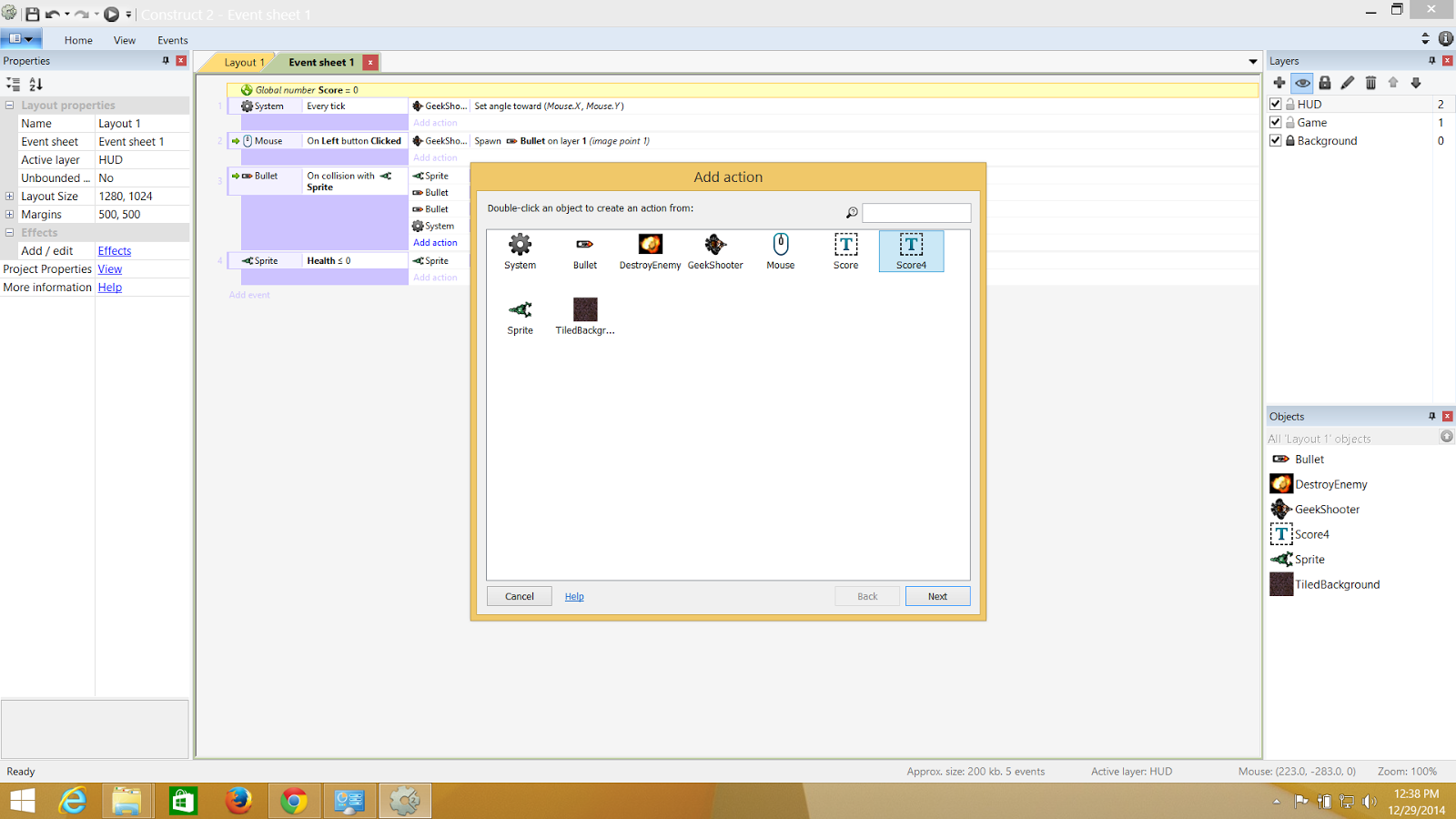 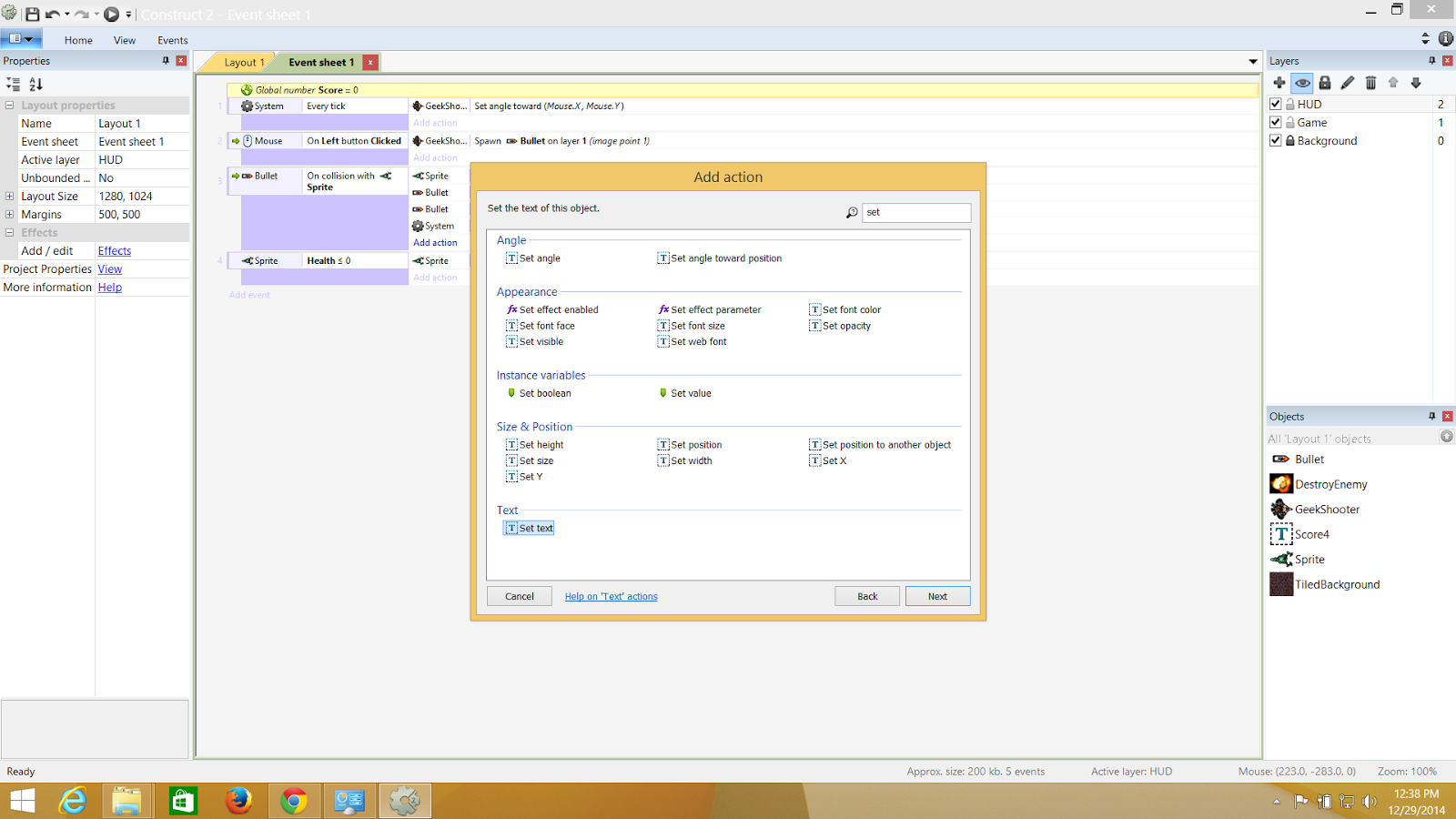 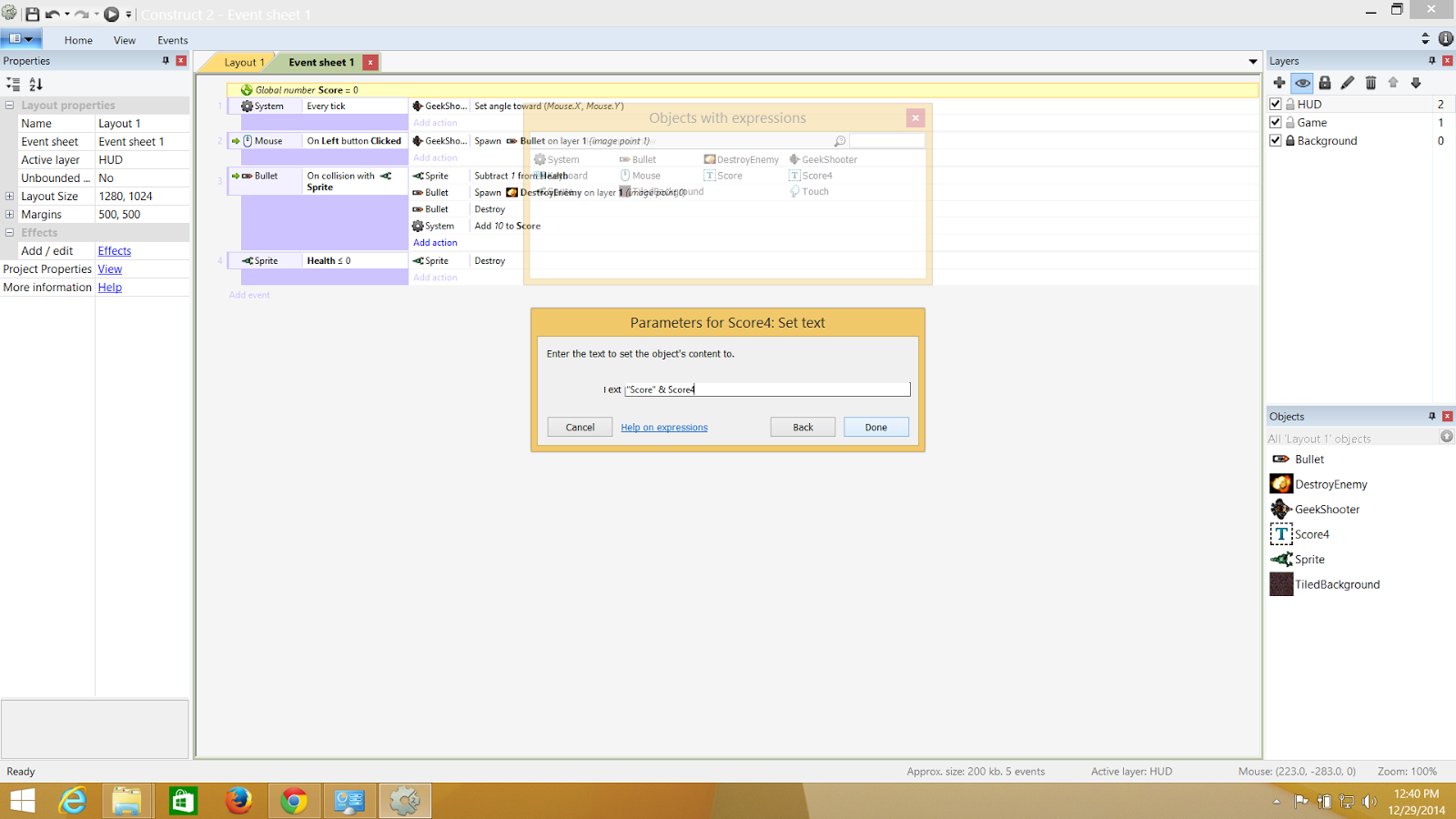 Regeneration of Monster and The player kill

Here I will generate a monster in every 3 seconds and kill the player when the monster hits the player.So couple of more events, Firstly, we pick up a random width or height or height and width and repopulate the monster and finally have the player killed if the player is collides with any of the monster.

But yes, guys need to push it to store. So you will require to export this to Visual Studio where from you can package it and push it to the store.


Construct 2 gives this awesome feature to simply port your game to any platform.


**NOTE: You need to fill the Project Name ,Author and Description Before exporting. 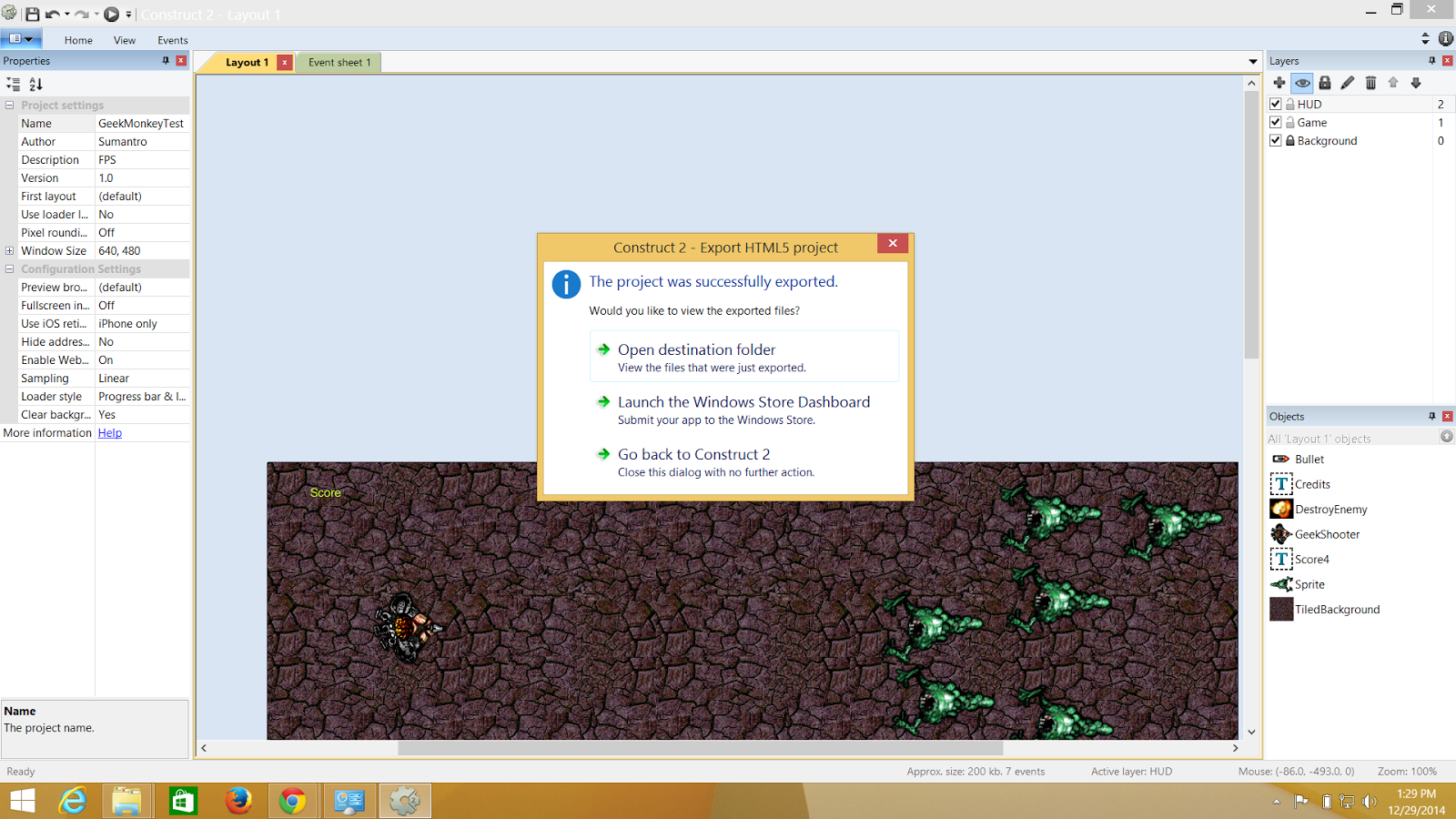 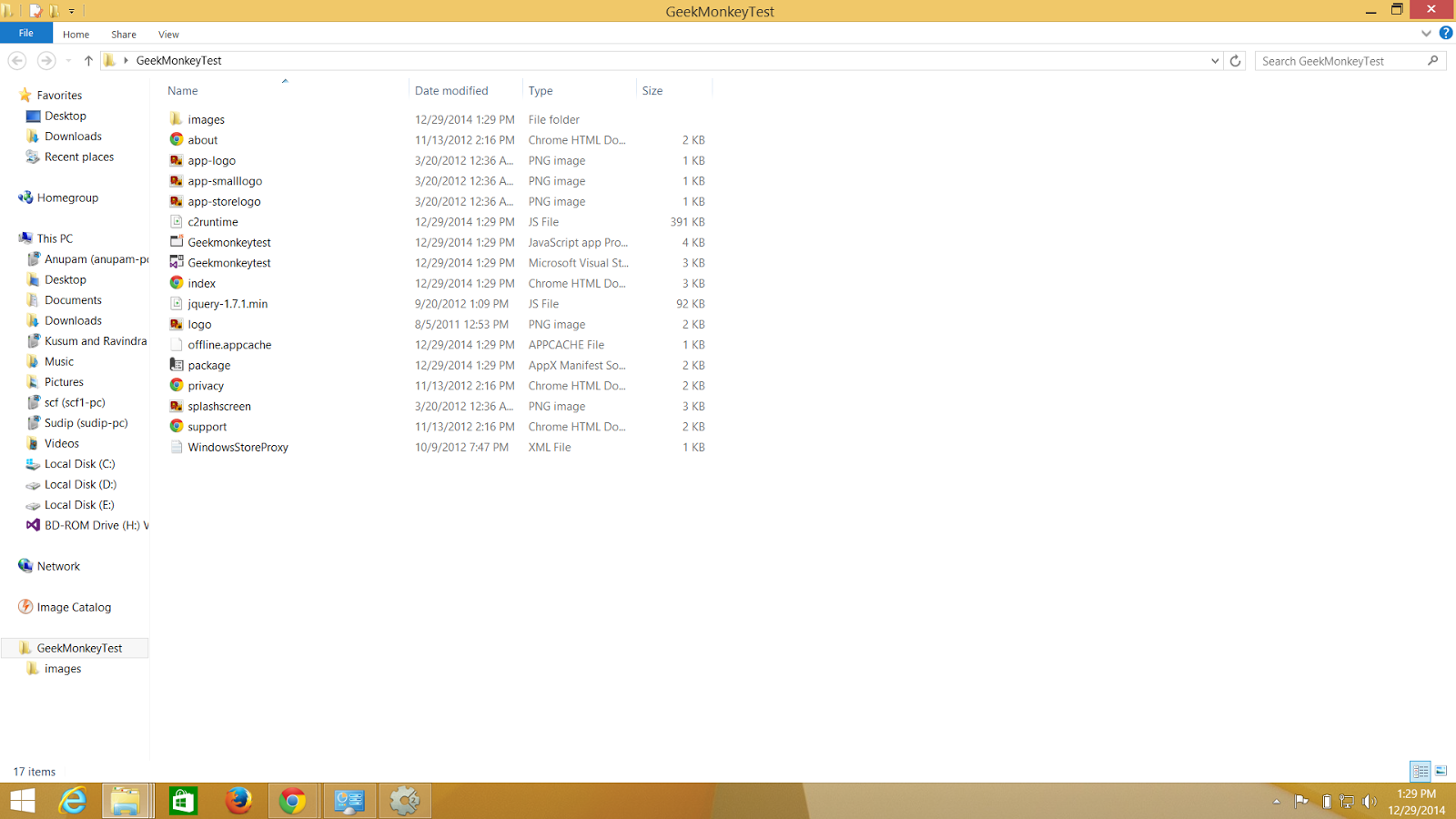 Soon after you hit Export and select the option your project will be exported to a desired folder with all the resources inside it!

Now I have all my resources and the .sln file ready for Visual Studio.

SO ,this is the package.appxmanifest file where you need to give it a certificate. If you are new with game or app dev you can create your certificate the same way its shown below. 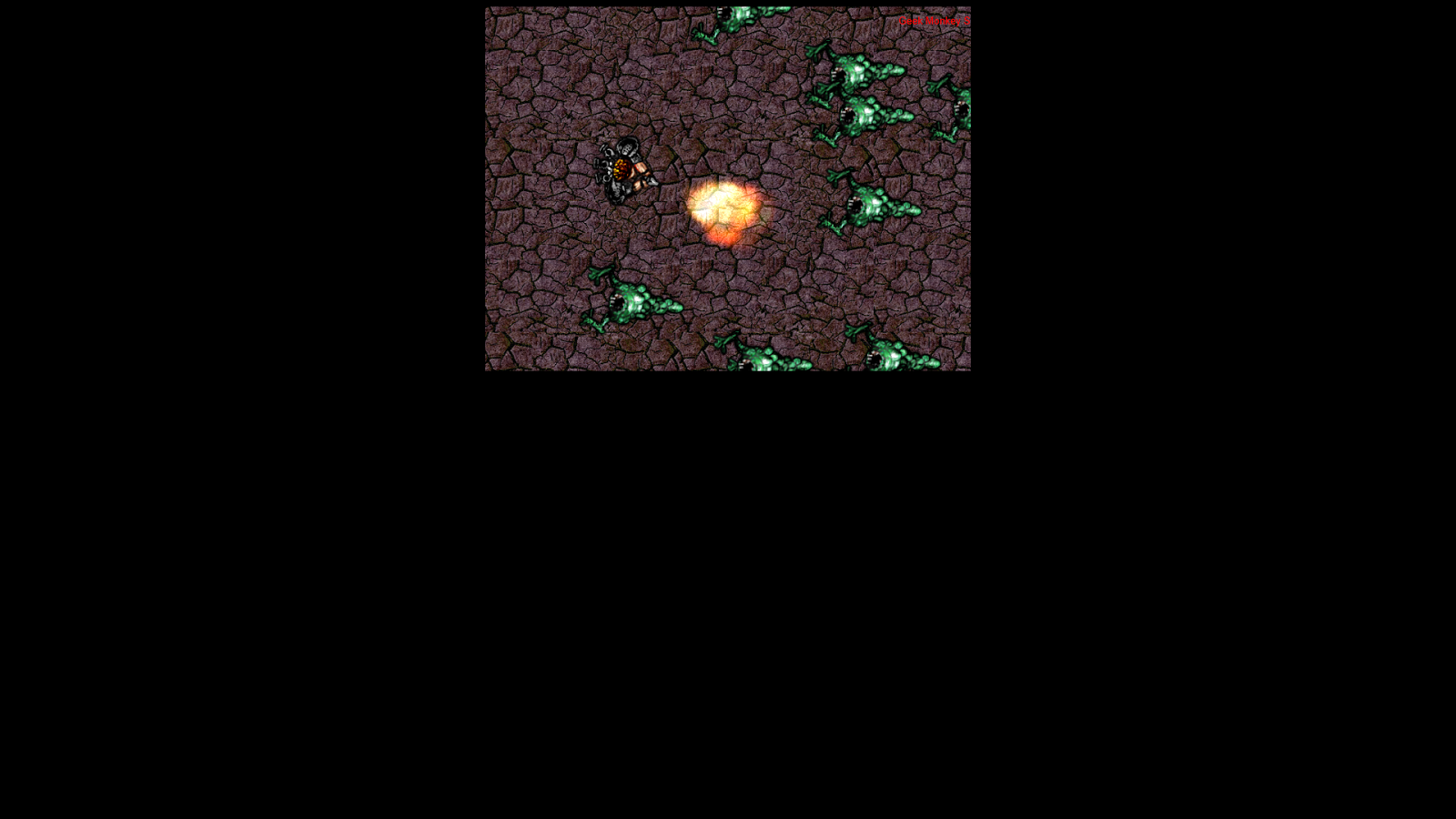 This is how your game looks when deployed and if you have noticed it didnt take much time to make such a game!